Can I Get Workers’ Comp for PTSD in California? 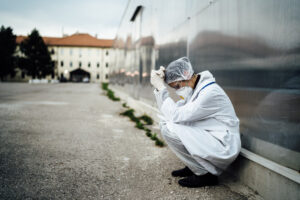 When many people think of PTSD, they often correlate the disorder with veterans of combat or war. There is a common misconception that only those who were enlisted and fought in the military can have PTSD, but this is far from the case. PTSD, or Post-Traumatic Stress Disoder, is a psychiatric disorder that is caused by any traumatic event such as physical or verbal violence, rape, natural disasters, abuse, and more.

Many workers in California who have suffered through traumatic events, such as the COVID-19 crisis or experiencing a serious accident on the job, have wondered whether or not their employer’s workers’ compensation insurance covers disorders such as PTSD. Take a look below as we discuss the workers’ compensation guidelines and how it relates to mental health.

In the state of California, any employee who has worked for an employer longer than six months consecutively is eligible for compensation from their employer’s insurance if they experience an accident or obtain an injury while at work or on the job. If an employee has a psychiatric injury—which includes PTSD—that has occurred as a result of an incident at work, they can be compensated if they have been diagnosed with a mental disorder that causes disability or the need for medical treatment.

Stipulations of an employee obtaining workers’ compensation in California for a mental health related injury state that the disorder must have been at least 50% caused by work or something that occurred while on the job. This may include workers such as first responders or frontline workers, but it may also extend to teachers who have witnessed school shootings or bank tellers who have been held hostage in an armed robbery.

PTSD is understood as a psychiatric disorder that affects millions of people each year. Common symptoms of PTSD can change from person to person, depending on the type of traumatic situations they encountered and may include:

In many cases, the symptoms of PTSD can come in waves, and many people experience a combination of these symptoms at once. For example, someone who experienced an abusive relationship may have flashbacks of traumatic moments during the day and nightmares of the same events at night, while also feeling anxious and detached from their personal life.

Certain symptoms may worsen over time or increase in severity. Individuals who have developed PTSD can experience shifts in symptoms such as depression, which can cause more lasting damage to their mental health. If you notice that any of your PTSD symptoms have become worse over time, it is important to seek treatment and speak with a licensed mental health professional.

Common Causes of PTSD from the Workplace

Those who are employed as firefighters, hospital workers, and ambulance personnel are among the most likely to suffer PTSD as a result of events they have witnessed and experienced in the workplace. Jobs such as these, where another individual’s life is on the line, can create painful memories that stay with employees for their entire lives.

If you can imagine witnessing a patient pass away on an operating table because you could not save their life, you may have an idea of just how common it is for anyone in those job roles to develop PTSD or a related mental health disorder. Other work-related incidents that might cause an individual to develop PTSD might include:

Many treatments for PTSD exist today, including medication, cognitive therapy, and even art therapy. More than ever before, living with PTSD is easier, and there are a variety of options for overcoming and coping with the disorder.

Speak with a Trusted Workers’ Compensation Lawyer in California

Living with a mental health disorder like PTSD is not easy, especially when events that occurred in the workplace are the result of excessive trauma. You don’t have to fight that battle alone. The dedicated and skilled legal team at KCNS Law Group believes that you deserve to be compensated fairly for the emotional anguish you experienced, and we can help you obtain that compensation.

Don’t wait another day to seek help for your PTSD-related workers’ compensation case. Reach out to us at (818) 937-9255 or contact us online to schedule a free consultation with one of our experienced legal professionals.

Get Help Now
Home » Workers' Compensation » Can I Get Workers’ Comp for PTSD in California?
Translate »